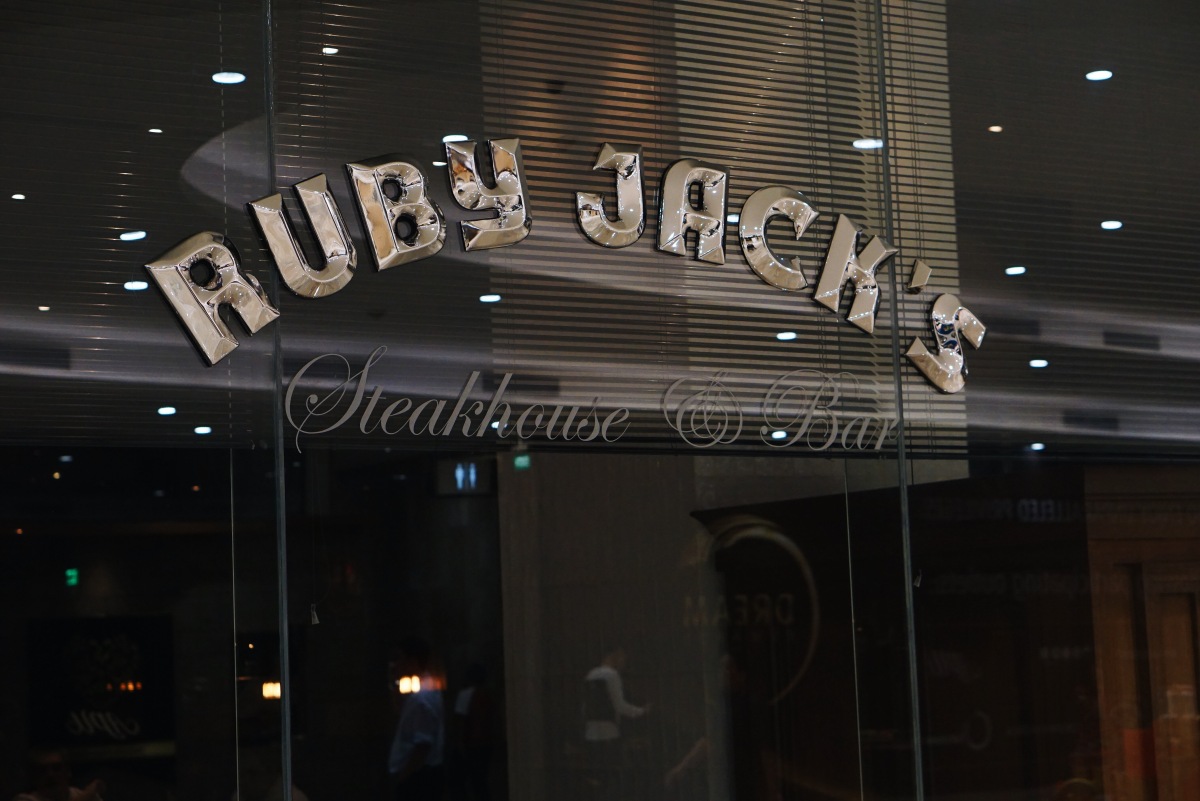 Last week, we had the chance to try out Ruby Jack’s Steakhouse and Bar in the famed hotel and casino complex in Paranaque City, City of Dreams. It was another after work event for us but this time, it was way closer to where we live. We made our way pretty fast with very little traffic jam along the way. Also, we arrived earlier than we expected so we had time taking photos of the place before dinner began. Before we share our full EATSperience, we just want to share a few background information about Ruby Jack’s – Steakhouse and Bar. Ruby Jack’s is a classic, contemporary steakhouse and bar from Tokyo, Japan. The restaurant prides itself for premium ingredients; from dry aged steaks, fresh seafood, to US, Australian and Wagyu steak varieties. Sounds great so far? Let’s get going before we get all starving! Here comes our Ruby Jack’s – Steakhouse and Bar EATSperience, enjoy! 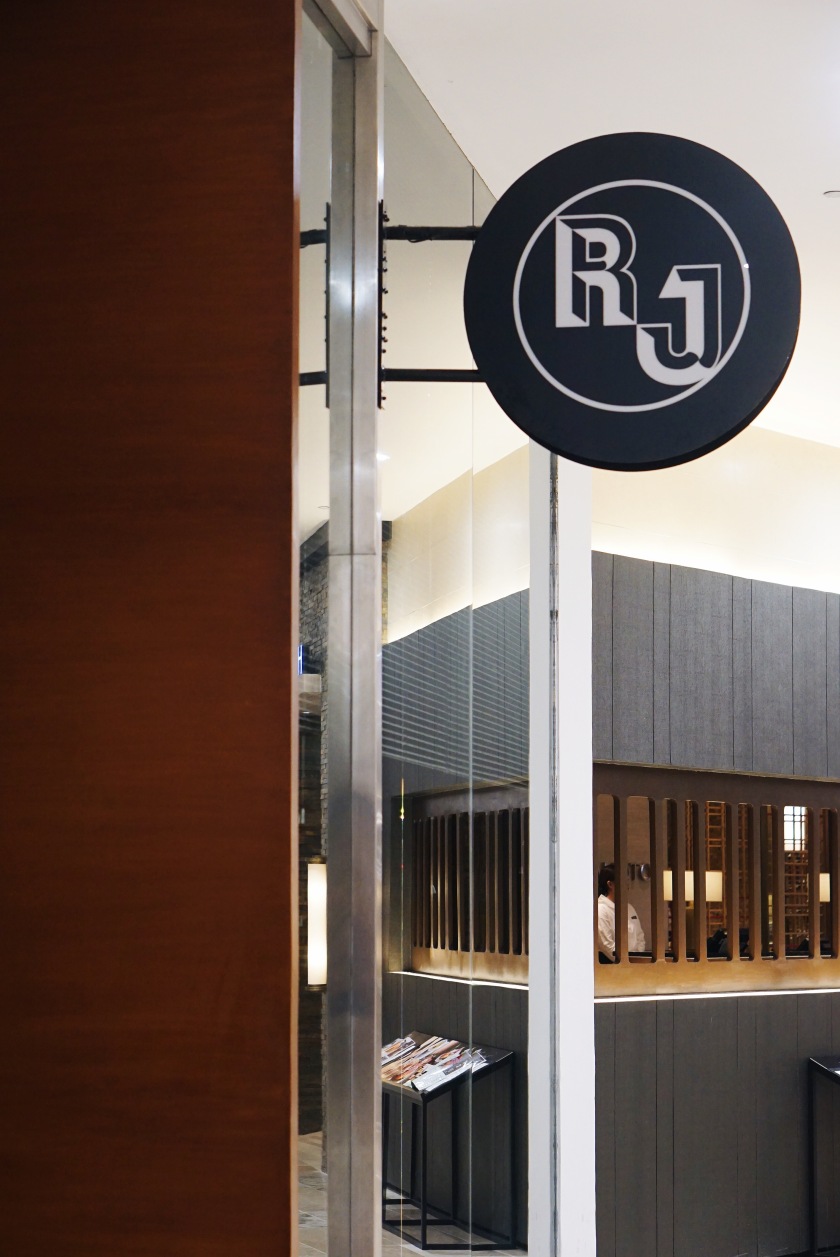 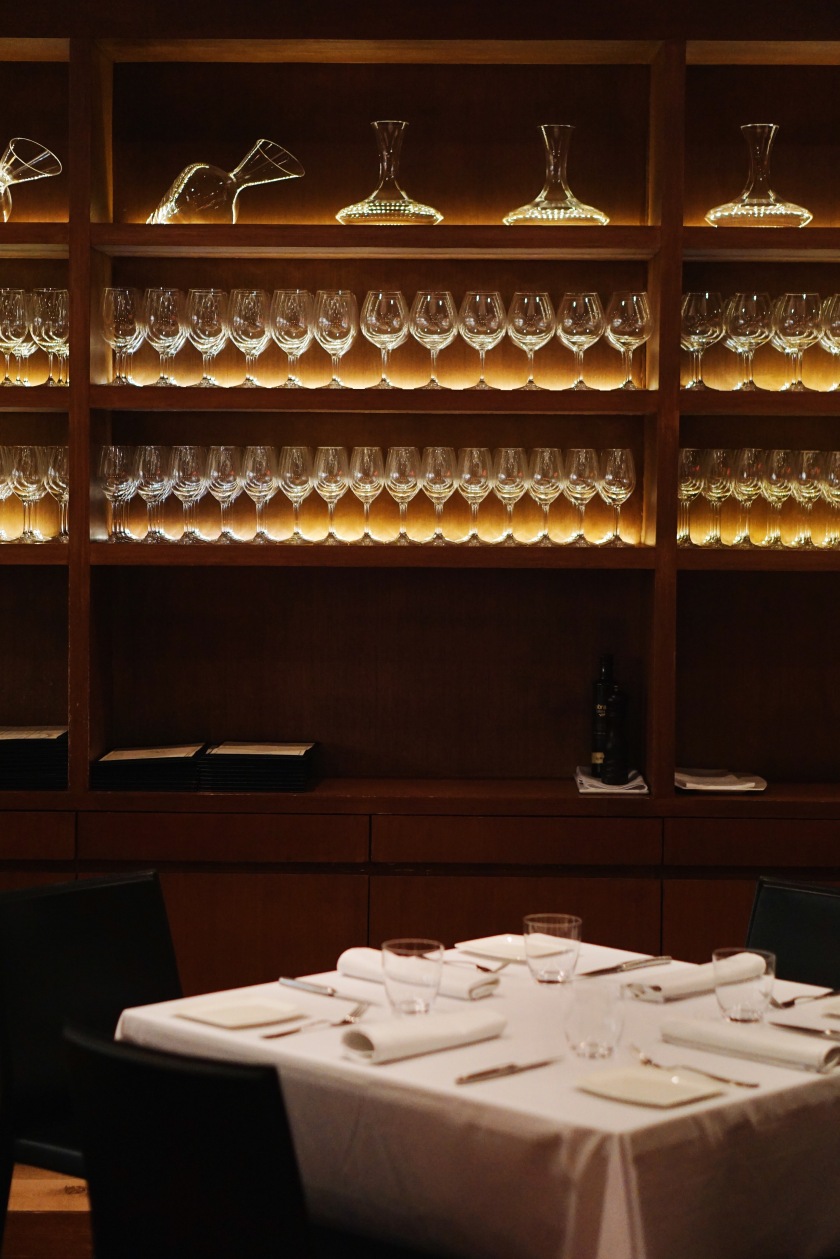 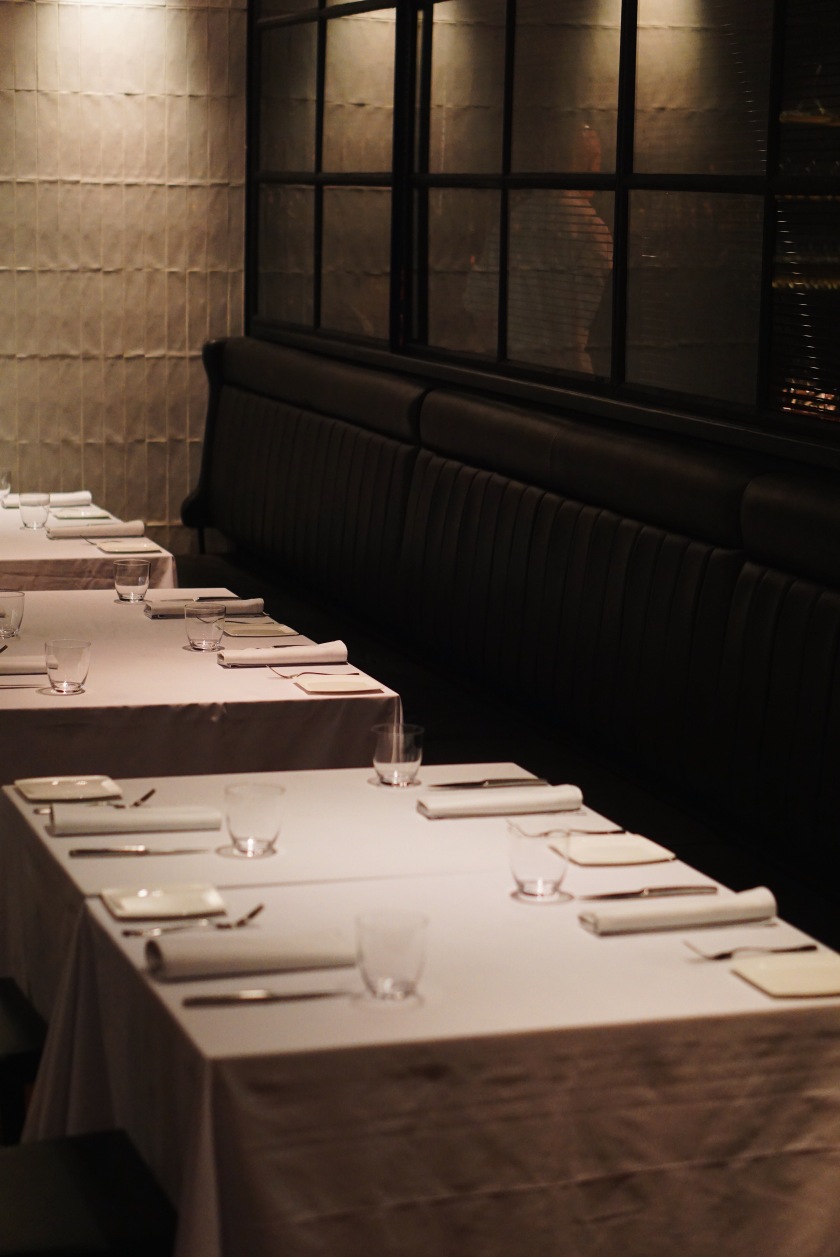 Attention to every bit of detail. Every piece of silverware and furniture were imported, to match the ambiance of their restaurants in Tokyo. The management of Ruby Jack’s Manila made sure that diners here will get to EATSperience the same high quality dining experience the brand is known for.

Ruby Jack’s is not all about steak. Remember that because they also have a fine list of whiskeys, martinis, wines and many more to complement the steak EATSperience. We don’t really drink much but Mr. Eats had a glass of red wine when it was time to devour some steaks. 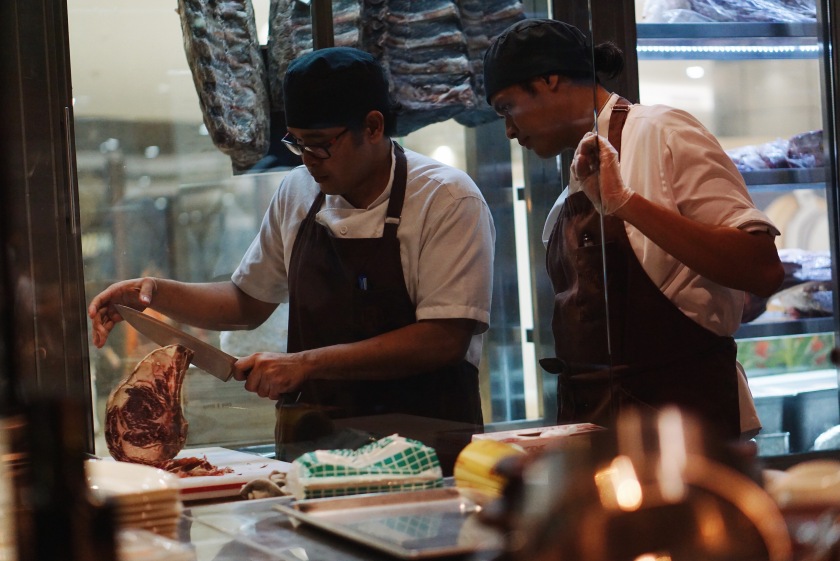 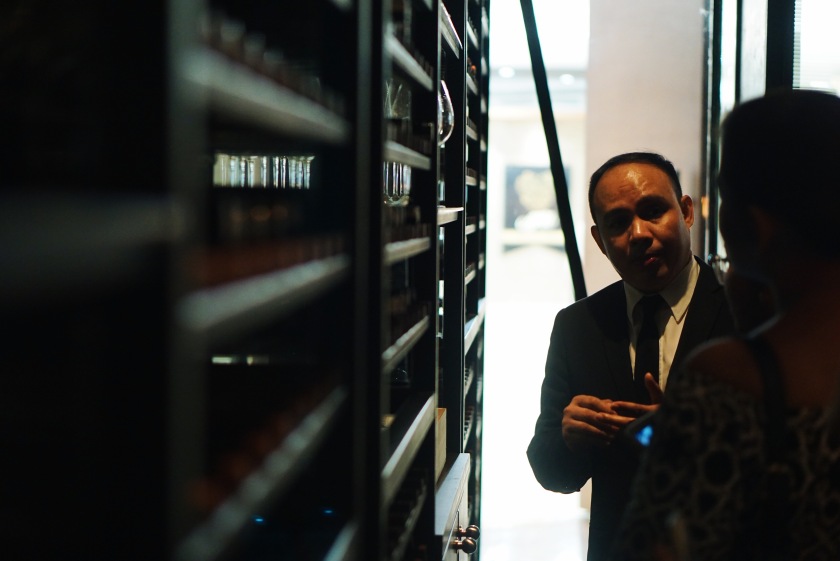 Aside from a sleek bar, Ruby Jack’s also has a wine cellar that features over 800 bottles of wine. They also have an in-house sommelier (wine steward) to assist diners in picking the perfect match for their prized piece of steak.

Started our Ruby Jack’s EATSperience with…

[Mr. Eats] We were actually given five starters but I forgot to take a photo of the superb Onion Soup which was extremely cheesy, thanks to the Gruyere Gratin on top. I had to stop halfway because it was really filling. Ruby’s Caesar Salad may look ordinary but wait till you get your first bite. The dressing was flavorful without being heavy. Also, I enjoyed it because of the generous amount of cheese and crispy bacon on top of it. It was my first time to try something like the Boutique Tomatoes. They use sugar tomatoes (imported from Japan) which was uniquely sweet. It was perfectly complemented by strong earthy gorgonzola cheese dressing.

[Mrs. Eats] Each of the 5 starters were superb in its own way. I must say that all the ingredients were fresh and were of high quality that gave me a really good EATSperience. I agree with Mr.Eats with how he appreciated the first three starters. Now allow me to share my EATSperience for the next 2. I really enjoyed the Teppan Grilled Foie Gras as it gave a crisp and smooth texture, and it was a melt-in-your-mouth kind of EATSperience. As for the Sizzling Scallops, it was cooked perfectly and the sauce that was composed of black garlic butter-lemon, added sweetness to the naturally sweet scallops. With the starters that we have tried, I knew that we will be having a really good dining EATSperience here at Ruby Jack’s.

It’s almost time to try out Ruby Jack’s prized steaks but before that, we tried out five out of their eight sides…

[Mr. Eats] My bad again. I wasn’t able to take a photo of the Creamed Spinach which was my number two favorite out of all the Ruby Jack’s sides. The best among the five that we tried was the Lobster Mac and Cheese. It was really filled with so much lobster flavor in it. Plus the fact that it was extremely cheesy. What more can I ask for?

[Mrs. Eats] Good food just kept coming on our dining table. The 5 sides that were served were really enticing. Among the 5, my 2 favorites were the Creamed Spinach, because the flavorful cream complemented the Spinach well, and also, I always would want to have a vegetable side to go with my steak. Another favorite was the Lobster Mac and Cheese. As it had heaps of Lobster and yes, the melted cheese made it even better.

Now, it’s time for the main event of this EATSperience, the STEAK…

[Mr. Eats] The Tomahawk was HUGE in size and it was also big in beefiness. The perfect steak for people with limitless appetite. Make sure you eat it with the horseradish sauce for a complete EATSperience. I was left speechless after my first bite of the A3 Wagyu Sirloin. Yes, to those who know how talkative I am, I was left speechless. The A3 Wagyu Sirloin was probably THE BEST cut of steak that I have ever had. Period. It literally melted in my mouth. The flavor was simply impeccable too even without the twice cooked truffle dijon, which by the way, was equally tasty too.

[Mrs. Eats] After a long day at work, we indeed deserved these belly-filling steaks. Look at those beauties—the Tomahawk left my jaw dropping as it made its way on our dining table. It was really huge and it wasn’t just big in size, it was also charred and grilled perfectly. The Japanese A3 Wagyu Sirlion had me at my first bite. A mouthwatering EATSperience that had me wanting for more.

After all the happiness we have had from the steaks, our evening just got happier with the arrival of DESSERT…

[Mr. Eats] Out of the three lovely desserts, I loved the Baked Cheesecake the most because it was something that was more unique to my palette yet it worked like magic. I had to eat it all the components together over and over again because of the unique combination of flavors (citrus dayap, creamy cheesecake and refreshing earl grey ice cream) it had.

[Mrs. Eats] My favorite part of a meal—Desserts! Among the 3 that were given to us, I fell in love with their Buco Pandan Pavlova. A different take on the usual Buco Pandan dessert that we Filipinos grew up with. From the ice cream, to the pandan jelly and the pandan sauce—everything was perfect! This ended my superb dining EATSperience at Ruby Jack’s with a really happy tummy.

Our Ruby Jack’s EATSperience has finally come to an end! We can safely say that this was one of the best EATSperiences we have had in our two years of blogging. The service was awesome without being intimidating. Our host was there from beginning till end. He shared valuable insights on the humble beginnings of Ruby Jack’s until how far they have gone. We learned so much about steaks and the restaurant itself. In short, we really had a great time. If we will get a chance to splurge for dinner, we would probably choose to dine at Ruby Jack’s and order our personal favorites to relive this EATSperience. That’s it for this edition of EATSplorations! Till next time!

This site uses Akismet to reduce spam. Learn how your comment data is processed.

Read our EATSperiences in your own language